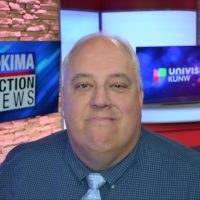 Bob started his career in radio, working every facet until becoming an owner of multiple stations in the early 90’s.  In 2000 he switched his focus to Spanish Language broadcasting.   In 2006 he sold his radio stations moved to television, launching the Univision Television affiliate in Yakima and the Tri-Cities Washington.  Since then he has added the market’s heritage CBS Station and a CW affiliate to his responsibilities.  His passion remains rooted in the Latino community and is most proud of the accomplishments he and his stations have made over the years.