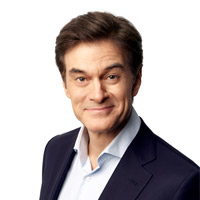 Dr. Mehmet Oz is the host of The Dr. Oz Show which is about to enter its 12th season.  Dr. Oz has won ten Daytime Emmy® Awards for the show and is an Attending Physician at NY Presbyterian-Columbia Medical Center.

Dr. Oz received his undergraduate degree from Harvard University and obtained a joint MD and MBA from the University of Pennsylvania School of Medicine and Wharton Business School.

Previously, Dr. Oz was a featured health expert on “The Oprah Winfrey Show” for six seasons. He is the co-founder of Sharecare.com which won “Best Medical App” award for AskMD in 2014 and has a bookazine with Hearst titled, “The Good Life.” Dr. Oz is also the author of eight New York Times Best Sellers including his most recent, “Food Can Fix It.”